There was a point in time, in my early teens, where I wasn’t even sure I liked them, but mostly, it was just that I didn’t ever see myself as a mom. A wife, yes. Sure. A mother? Not so much.

I dated copiously and enthusiastically throughout my twenties and thirties, involving myself with this man or that (serial monogamy was my forte). There were men with children, others without. Some who wanted (just not right now) and others never – or just not with me – and I was fine with it all.

The ticking of my physiochronometer was barely ever louder than a whisper, and I was pretty sure, as I entered my mid-30s, that the battery was probably dead, anyway. As an only child, I did feel some parental pressure to yield to my God-given womanly duty to provide my parents with a grandkid or two, but when 34, 35 and 36 all passed without so much as a missed period or wonky cycle, the requests and hints stopped. Besides, they had a dog. What more did they need?

And then something happened.

I met someone super-fantastic about a month before my 38th birthday, and decided/realized rather quickly, that if ever there was a guy to make me “take one for the team,” and have a baby, he was the guy. He didn’t have any children himself, and at 40, he’d figured “if it hadn’t happened by now, it probably wasn’t going to.”

Then along came me. And after some months of dating, and some discussion, we came to the agreement that we’d like to make something happen.

But first, an appointment with my doctor.

I’ve had the same GP since I was 16, and over the years our relationship has transitioned from doctor-patient to more of adored auntie-infrequently-seen niece. When she heard that I was finally going to give reproduction the ol’ college try, she was more than thrilled, but heedful. At my advanced age, she warned, it was likely going to take a few revs of the engine to get’er going. But not to worry; if there was no baby within six months to a year, she would refer us to a specialist. For now, good luck!

That was in April.

We didn’t start having more sex (in fact, we were on a downswing around that time and were having LESS of it), nor did I start plotting optimal ovulation times or monitoring basal body temperatures or the consistency of vaginal mucus (blech). I did, however, increase my folic acid intake – along with my Jacob’s Creek Moscato and blue Pall Mall consumption. (It started warming up. Patio season. I have bad habits. Don’t judge me).

Sometime in June, I began to feel… “off.” I couldn’t put my finger on it. I would have these bouts of fatigue where I would literally have to stop in the middle of whatever activity I was participating in, and sleep like the dead. I’m anemic, so I just figured my iron stores were way low. With my annual physical no more than mere days away, I knew I would just raise the issue with my doctor the next time I saw her. So I did. And because it never crossed either of our minds that I could be pregnant, she didn’t order a blood test to check my hCG levels.

I missed my period the following week.

Well, to say “missed,” is inaccurate. It was two days late. But in a 28-day-cycle girl (since the age of 12), two days and no period is an eyebrow-raising event. It was late Sunday evening on Canada Day weekend when I decided to buy an OTC pregnancy kit. I was devising a plan in my head to explain why I suddenly had to leave our street BBQ at quarter to 11 at night, when my neighbour serendipitously asked if I would kindly buy him smokes from any place that was still open. He was apologetic; he’d had a few too many to drink, he explained, or he’d have just gone himself.

I took his 20 bucks, and the opportunity. I drove to every Shopper’s Drug Mart in my area until I found one that was still open. I bought my test, hit the gas station and bought the cigs, and re-joined the BBQ upon my return. I soon realized that the only thing I could think about was peeing on a stick , so I confided in my neighbour Trish, and told her that I was leaving the party again. If anyone asked, I’d gone in search of more food to throw on the grill.

The instructions on the box said something about morning urine, and to hold the stick in a steady stream for what seemed like an eternity. I wasn’t very hydrated, and wasn’t about to get a drink so I could pee more, so I just did my business as best I could, placed the test on the vanity counter and waited.

(Two minutes was all it took, but I kept checking every ten seconds or so. It reminded me of when I was little and my cousins used to take Polaroids, and then wait anxiously and impatiently for them to develop.)

And finally, finally, after 120 or so nerve-wracking and potentially life-changing seconds, I checked the little results window, and confirmed what I’d already suspected. 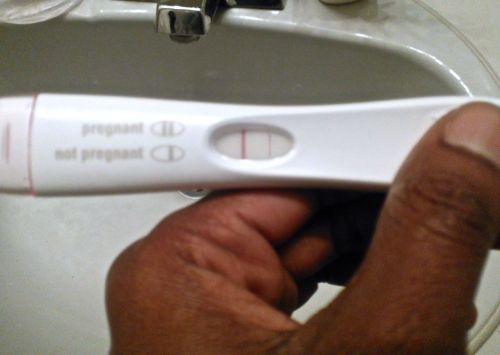 6 thoughts on “the beginning”