Initial surprise notwithstanding, I have to say I’m pretty freaking happy that li’l miss is coming into the world a good week or so earlier than planned.

At 38w1d, I’m extremely uncomfortable. I know I keep bitching and moaning about it, but as anyone who has made it to this point (and sometimes beyond) can tell you, the last weeks aren’t much fun.

in the nude…
Currently, I don’t like wearing clothes. I haven’t bought a stitch of maternity gear, so the the few loose-fitting items I wore in month six, seven and even eight REALLY don’t fit me now. I’ve resorted to a pair of tights and pajama pants borrowed from mum, and a few stretchy tank tops. When I wear my own clothes, I look as though I’ve been stuffed into them. It’s impossible to look cute now, which is why I’ve pretty much stopped leaving the house. I’ve always been comfortable in the buff, but now that I’ve moved into ginormous territory, I am happiest in just my underwear (and even those feel too constricting at times) with a sheet covering me for modesty.

END_OF_DOCUMENT_TOKEN_TO_BE_REPLACED 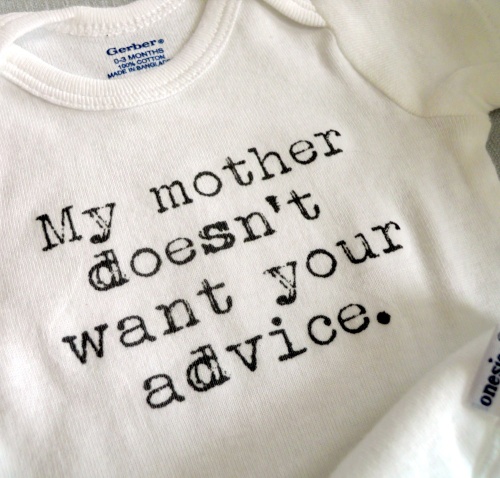 I have an acquaintance who had a baby, like, a minute ago, and she has suddenly become the rather insufferable Expert Of All Things Baby-Related (EATBR).

From aspirators to zinc cream, she is constantly dispensing advice on which brand/size/colour/flavour/version of a technique, product or service is best. I wouldn’t find her so annoying if this was her fifth of sixth child (in fact, then she would have earned the title of EATBR, and I might be inclined to take a note or two). But alas, this is her first babe, her first shot at parenthood – likely the first time in her life she’s ever heard the terms colostrum, gripe water or swaddle.

And yet, somehow, miraculously, after having barely just squeezed progeny from her loins, she has earned her Level Nine Grand Wizardress of Knowledge badge, entitling her to spew nuggets of wisdom on other, hapless first-time moms-to-be.

(*My girlfriends sent me a message on Facebook with that very greeting. Aw.)

Good Lord. Today is 36 weeks. I am officially nine months pregnant. Aside from growing my hair, school, (and a stint living in Montreal), I’ve never done anything this difficult, for this long, in my life. 😀  I wanted to take another selfie to commemorate the occasion, but honestly, I’m feeling like I’ve got a watermelon strapped to my frame, and not at all very photogenic at the moment.

So instead, here’s a picture of a watermelon-as-baby.

Oh, and speaking of watermelon, these: 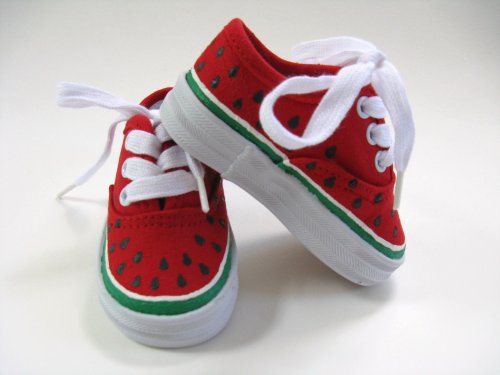 Come on. SO cute. Much better than that thing I posted above.

I know this was a disappointing post. I’m sorry. I usually dislike when my favourite bloggers post nonsensical shit like this (assuming that I am one of your favourite bloggers). Never mind. I have a few posts in the works, so you’ll hear from me over the next coupla days. I’m feeling prolific; I might as well write while I can. I don’t know if I’ll have any energy at all to do so by next month.

I really should clean the mirror.

I am huge, I am uncomfortable and I can barely breathe. I’m unable to sleep for more than two to three hours at a time, so I’m exhausted, a little cranky and always hungry. I can’t pee without experiencing Braxton-Hicks, and with my ever-expanding dimensions, simple, daily things like climbing the stairs or washing the dishes leave me breathless. I can’t eat without spillage, as the belly makes it impossible to pull up to the table – no matter how careful I am, I invariably drop something in transit from plate to mouth. Being comfortable in clothes – or in my skin! – seems like a distant memory.

However, with every kick, roll, flutter and turn, I grow more and more excited and curious about the little peanut who still grows inside me. I wonder if she’ll be as active outside as she is in my womb. Will she be a happy baby? Will she be a cuddler? Will she like music? Will she be a sleeper or an eater? Will she be a tiny baby? What will her first cries sound like? I’ve never been so unsure, but also anxious, impatient and thrilled at the prospect of being a mommy. I simply cannot wait for the arrival of the little whirlwind that’s going to change my life forever.

Any day now, Aisha. Any day.

I’m going to get someone to bring me a whole platter of this THE MINUTE SHE IS OUT OF MY BODY.

Was out to dinner with the boy on Saturday. Navigating restaurant menus has become tricky, because my first inclination is to either order steak or salmon. I like (nay, love) my steaks rare (warm and bloody, really), which is a no-no during pregnancy. Salmon isn’t on the always-avoid list, but because the mercury can be harmful to the little one, I’ve just not eaten any in the past nine months. At this point, I don’t think it would harm her, as she will be, as of this coming Friday, A FULL TERM BABY (woot) — but why take any chances?

I miss eating Brie. And all soft, unripened cheeses. I so miss sushi – salmon sashimi in particular. I miss drinking a full glass of Jacob’s Creek moscato (oh, who’m I kidding? I can easily polish off a bottle of that sweet elixir) and having a cigarette after a good meal. Yes, I’m a former smoker. We’ll see what happens with that. I know it’s a disgusting vice, and I’ve made it the last 200-odd days without one, so how hard can it be to continue on the path? I’ve got to say it’ll be a lot easier to maintain non-smoker status as the boy quit last summer…and if I’m planning on breastfeeding, the drinking and the smoking will have to remain a negative, Batman.

Know what I also miss? Exercise. Never thought I’d say that in a million years! I can’t wait to get back to doing Insanity and ZWow and all of my other HIIT. Exercise also includes salsa/bachata – and any dancing in general. I’ll likely have another 6-8 weeks after Aisha is born to be able to even THINK about moving with any intensity, but oh, how I dream about being active again.

Don’t get me wrong; I’ve enjoyed having pregnancy as an excuse to pretty much eat and sleep with some abandon, but I also have to say I can’t wait until she’s here so I can get back to some semblance of the me that was.

I miss being able to see my toes. 😦

It’s official. My boobs have gone from pleasers to feeders.

Since my largesse has made me an insomniac, I spend an inordinate amount of time browsing the innerwebs. I alternate between Pinning and researching all manner of baby stuff.

Peanut is due practically any day now, and I’ve been wondering at what point will my milk start to come in? Every time I shower, I squeeze and (wo)man-handle the girls in an attempt to produce some kind of response, but alas, nothing but dust. I started to worry that if my babe came early, she’d starve, ’cause her mama’s newfound tatas are only good to look at.

And then I came across this article, and realized that my technique was all wrong. Curious (and, I admit, dubious), I whipped off my top right there in my computer chair and began using the method described. Instant success. I couldn’t believe it. The secret is all in the hold. Previously, I’d just been tweaking the nipples (which, I’ve since learned, can actually induce labour) and coming up dry.

I can NOT get enough of my new trick. I’ve been trying it out as often as I can, marvelling at the output. Mind you, it’s certainly not gushes by any stretch of the imagination; it’s not even possible that I’ve produced a half-millilitre of anything. But still! My boobs! They make…stuff!

When I told the boy that my milk had started coming in, he gave me a confused look, and then put up his hand. “Uh…high five?” He offered.

“Yes!” I squealed, and smacked his palm. “It’s good thing! It means I can feed Peanut.”
“Oh. Awesome.” He nodded in approval.

I thought about actually showing him, but he freaked out at the size my stomach the other day, so I spared him the demo. I also opted not to tell him that I’d tasted it*. He probably would have run screaming from the room.

It’s official. I’m huge. At least, the belly is. Honestly, I know I’m defying some kind of law of physics, and I don’t understand how I’ve not toppled over from sheer imbalance.

People – friends and relatives – are certainly getting a thrill out of my proportions. Generally, I’ve always been “the skinny one,” particularly within my family. I have an aunt down from Barbados, so my mother and I went to do some visiting on Sunday. I also haven’t seen my mother’s other sisters since the annual family BBQ in August, so I knew they were in for quite the surprise.

Sure enough, there was the widening of eyes and the cracking of jokes (“you look like an anaconda after a meal!”). While I could certainly do without the latter, I got rubbed and patted like Bhudda, which I didn’t mind at all. They are all tickled to see my burgeoning bump.

I read someplace that the third trimester is where babies tend to double in size, and I seem to be the textbook example of this. My father was away for two weeks, and upon his return on Monday, his first words were “Let me have a look at you!” followed by, “Holy, jeez.”

I certainly feel the difference. The skin on my stomach has darkened considerably and itches constantly, despite my religious application of balms, lotions, creams and oils. In the last few weeks, my sleeping patterns have changed yet again; I’m unable to sleep through the night, and there’s no way in hell I can sleep lying down, regardless of which side I choose. My navel still hasn’t popped. It’s just stretched flat and taut across my belly, leaving a shallow little dimple.

Sadly, my boobs haven’t grown any bigger. I’m going to have to be content with the set of small Bs I’ve been given.

What a difference a month makes.