I have an acquaintance who had a baby, like, a minute ago, and she has suddenly become the rather insufferable Expert Of All Things Baby-Related (EATBR).

From aspirators to zinc cream, she is constantly dispensing advice on which brand/size/colour/flavour/version of a technique, product or service is best. I wouldn’t find her so annoying if this was her fifth of sixth child (in fact, then she would have earned the title of EATBR, and I might be inclined to take a note or two). But alas, this is her first babe, her first shot at parenthood – likely the first time in her life she’s ever heard the terms colostrum, gripe water or swaddle.

And yet, somehow, miraculously, after having barely just squeezed progeny from her loins, she has earned her Level Nine Grand Wizardress of Knowledge badge, entitling her to spew nuggets of wisdom on other, hapless first-time moms-to-be.

Does it extend across species?

I just read the saddest story in the Huffington Post about a baby elephant in China that was attacked and subsequently abandoned by its mother. The little one cried for five hours (just typing that made me teary-eyed), and the story made me want to gather up this giant baby in my arms and console him.

It was this sentence that started the welling of the wet stuff:

“Photos taken of the crying baby elephant, named Zhuang Zhuang, show tears streaming from his red eyes and down his face. In one shot, he is seen lying under a blanket while he appears to weep.”

The accompanying photo (not the one above) finished me. I couldn’t bear to watch the video.

Generally, I’m a hardass to the human condition, but I’m a big animal-sucky; almost any picture or video of cutelings can set off a series of “awwwwww” from me. And heaven help me if said photo or footage is about abandoned or distressed animals.

On a normal, non-pregnant day, I’m gutted. With all the hormones coursing through my veins lately, I simply cannot.

Suck it up, buttercup. You wanted this.

It’s 5:37am, and I’m up because I’m wholly uncomfortable.

Today is 33 weeks. Peanut is the size of a pineapple (another one of my least-liked fruits/veggies) and I read someplace that this is around the time that she will settle into her final position before birth. She’s always been active, but lately her movements are bigger – stop-me-in-my-tracks shocking – as if she’s a rabbit burrowing a den for the winter. I’m feeling her feet (hands? elbows? heels?) dig into parts of my body she never bothered with before. I’m pretty sure my ribs are bruised from the inside.

Pelvic Girdle Pain has set in, making it near-impossible at times to walk with my legs together. I look like I just got off a horse, or as though someone gave me a good, hard boot to the crotch. I alternate between pain that keeps me awake, and pain (mostly from the back) that knocks me out. I’ve also developed Restless Legs Syndrome, which hits me hard at night. I literally feel as though I have ants in my pants (or under my skin) and constantly have kick and rub my legs and frequently change positions to get the sensations to stop. END_OF_DOCUMENT_TOKEN_TO_BE_REPLACED

Were it not for Google doodles, I’d be pretty uninformed.

Apparently, Children’s Day was proclaimed by the UN General Assembly in 1954. A globally recognized day, its goal is to promote the welfare of the world’s children – especially those living in poor conditions, or those who have suffered violence, discrimination and exploitation.

It’s fitting, I suppose, as today is also the day that one of my dear friends undergoes her second IVF harvesting. Round one was successful, and the result is an adorable, tiny yet feisty almost-two-year-old by the name of Naomi.

I am praying that the second round is successful. And that the result is a boy-baby. There’s too much estrogen happening among my friends and family (more than 10 little girls in the past two years, compared to a measly three boys). We are in dire need of some penis to make things a little more interesting – and a lot less pink – around here. 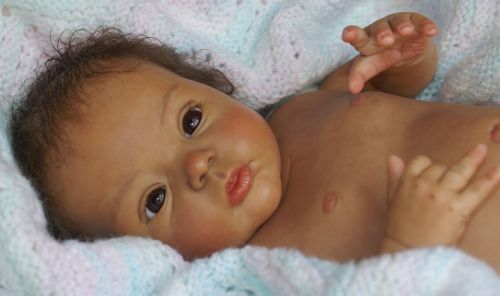 Can you believe this is a doll? This is “Aisha,” 🙂 by artist Gudrun Legler. See more of her work here.

The other day, the boy and I were chilling out front with my father when my neighbour’s son rolled through the ‘hood, wife and baby girl in tow. Greg and Jeanne are an interracial couple as well, but the inverse of the boy and I. Greg is black and she’s white. Their daughter, Arianna, is such a sweet pumpkin. I immediately grabbed her, and Jeanne seemed to be happy to have her hands free for a bit.

The boy recently had a dream that we’d had a baby girl, and as I cooed and fussed over five-month-old Arianna, I could feel him watching me. I walked over to where he was sitting. “Was our dream-baby as cute as this one?” I asked quietly, bouncing her in my arms. He smiled at her giggles.

END_OF_DOCUMENT_TOKEN_TO_BE_REPLACED 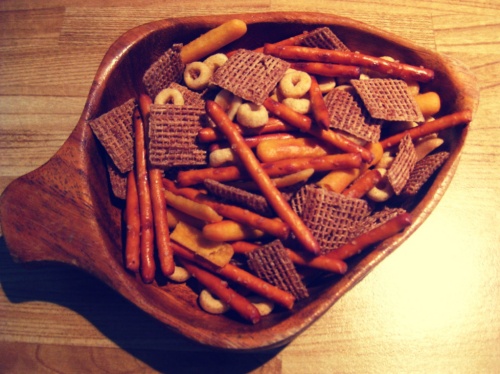 Bits ‘n’ Bites. My favourite snack as a kid.

weighing in
Yesterday marked the start of my eighth week of pregnancy. According to the pregnancy app, my little one is now about the size of a raspberry, and weighs less than half an ounce.

penny for your thoughts
The boy and I both have a lot going on right now. His recent hernia diagnosis, his impending surgery, this pregnancy and a lack of freelance work coming my way. We’re both stressed and a little testy, but it’s interesting to note how differently we deal with things. He bottles up and boils over, whereas I try not to dwell, because then whatever I’m worried about festers and grows into something much bigger than it is. And he thinks that because I’m not outwardly grumpy (until I’m around him, funny that), it means that I’m not taking things seriously. Worry doesn’t change a damn thing, I told him, so I don’t much care for doing it.

mean but oh, so funny
There’s dog shaming, cat shaming and, really just pet-shaming in general (here and here). However, this one, which is kind of like kid shaming, is the best yet. What started as a blog turned into a viral phenomenon and quickly took off (resonating with parents of toddlers everywhere, no doubt), spawning  this book.

(I could totally see myself doing something like this to my kid. Poor thing).

OT: thoughts on the trayvon martin fiasco
I really haven’t said much about the case over the last few weeks, and now that the verdict has been handed down, I still don’t have much to say. It’s disappointing, but not surprising. It also makes me worry about raising a little boy child in this day and age. If I had a boy, my son would most likely be rather fair-skinned (and perhaps not even immediately recognizable to some as half-black), but there’s a chance he could be closer to brown, like me. And maybe when he’s older, and he’s somewhere, at some time (perhaps the wrong time), something akin to what happened to Trayvon Martin could happen to my him. How would I explain this to a child? END_OF_DOCUMENT_TOKEN_TO_BE_REPLACED