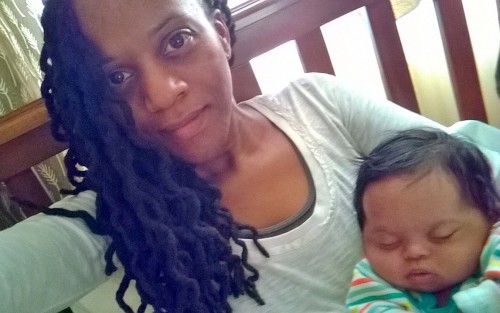 Hello, it’s been a while. Have you missed us?

Whew! I’ve been terribly delinquent. Being a new mommy is exhausting. This post has been in the works for over a week now…I sneak in edits while Peanut naps, and I hope I can finally finish before she wakes again for a feeding. I always knew children – babies in particular – required a lot of time and energy, but I had no idea just how much. Like the title of my blog suggests, there isn’t any guide to having kids…I’m learning as I go, and so far, so good.

Aisha will be seven weeks old on Wednesday, and while I missed blogging about the first month mini-celebration her father and I threw for her, I can certainly post some pics. 🙂 My mother teased us for being so treacly, but after what we’d been through with my pregnancy, and then the delivery (I know, I know, I’ll blog about it soon, I promise), it was our way of saying, “hooray, she’s here! Now let’s all drink some beer!” 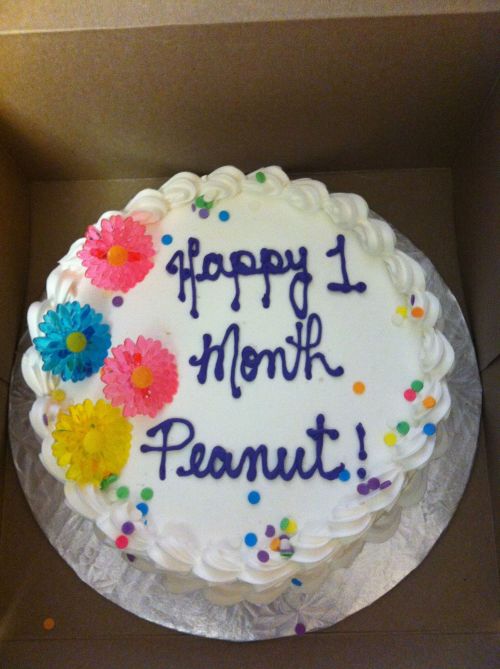 I guess this should actually read, “Happy 1 month and a bit” – but who’s counting?

In the past weeks, we’ve been rather busy with appointments – I swear, the child has seen more specialists in her short life than I have in the last 20 years. Audiologists, cardiologists, endocrinologists, geneticists…All of them weighing, measuring, feeling and scribbling notes about my kid. The reports are all the same: very alert, good mobility and weight gain. Aisha tracks people and faces with her eyes, reacts to sudden noises. She has also started to smile (something that elicits a chuckle from me every time she does it, and turns her father to mush). She’s also not a big crier; when she was new she would let out various mono-syllabic yells to alert us of hunger, discomfort or general ennui. She’s taken to exercising her lungs lately, though, and likes to holler her demands.

At this point, she is a “typical” baby, and it’s still a little too soon to see how Trisomy 21 will affect her physical and cognitive development. She can lift and turn her head when placed on her belly (thanks, tummy time!) but still has a little trouble holding up her giant noggin (her head’s a bit big, y’all) when sitting upright. Aisha eats, sleeps and poops regularly and without issue – although we did have to switch her formula around the three-week mark, as it was a little too harsh for her tummy. My breastmilk supply has pretty much dried up, so it’s bottle feeds for baby. She’s started spitting up after eating, lately, so I’m keeping an eye on that just in case it’s an indicator of future GI issues.

Physically speaking, I’ve had many people comment that she doesn’t “look” like she has Down syndrome, but I disagree. I totally see it, and I think she’s all the sweeter for it. Her eyes are a dead giveaway – the epicanthic fold gives her the almond-shaped, almost Asian-looking appearance. With her fair skin and dark hair, I actually had a lady at the doctor’s office last week ask me if Aisha was “mixed with Philippino or something.”

We had an appointment with the geneticist today, and the doctor asked me who Aisha looks like. There are bits and bobs of both her father and me in that tiny face of hers: she has my big eyes, my nose and lips; she’s got his eyebrows, filtrum and dimples. (She really is quite lovely and at peace when she sleeps. When she’s awake, she’s the library of human expression…I’ve never seen a baby make so many faces. It’s actually quite amusing, and everyone is sure I have a future comedian/character on my hands.) Mama? Are you finished yet?

She’s grown quite big – eight and a half pounds, now! I marvel at how much she’s changed in such a short space of time, and I wonder how long it will take before the evidence of DS manifests. How long will it take her to speak (if at all)? When will she walk? She’s great with a bottle, but will she like eating solids? Or eventually use utensils to feed herself? What about potty training? All these questions and more. They fill my head and sometime preoccupy more of my thoughts than I’d like. I have to remind myself to just enjoy her for the baby that she is, and when the time comes for transitioning to big-girl mealtimes, or creeping/crawling/walking, I will deal.

Little miss is awake, now…She is like clockwork with her feeds. I’m going to prepare a bottle and have cuddle-time with my girl. She’s growing so big, so fast…I need to stop worrying about THE FUTURE and enjoy my baby in the present, because she’s super-yummy. I still have moments where I look at her and think, “holy crap, you have a baby. Look how cute she is. YOU MADE THIS.” 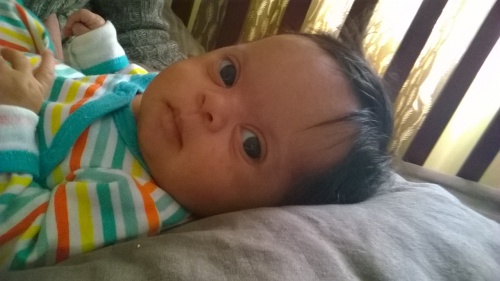 And then I laugh and give myself a high five. Which is basically a clap. I applaud myself for having made such a beautiful baby.